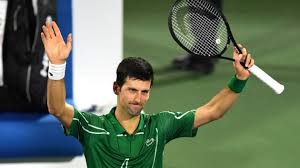 Novak Djokovic has announced Croatia’s Marin Cilic and Borna Coric as the latest players to join an eight-man tournament to tour the Balkans.

The first leg will take place in Djokovic’s hometown of Belgrade on 13 and 14 June.

“I’ll do everything in my power to be a good host,” said the world number one.

The tournament could be behind closed doors with Serbia’s coronavirus containment measures still banning large-scale gatherings.

After the Belgrade event, the tournament will move to the Croatian coastal resort of Zadar with Bosnia-Herzegovina and Montenegro pencilled in to host the final two legs.

Each event will feature two pools of four players with the winner of each progressing to a final.

Djokovic has only just returned to Serbia, having spent two months in Spain after visiting his brother Marko in Marbella when lockdown measures came into effect.

“Unlike many other players, I was able to train almost every day because we resided in a house with a tennis court,” said Djokovic, who began the 2020 season with a run of 18 straight victories that included capturing a record eighth Australian Open title.