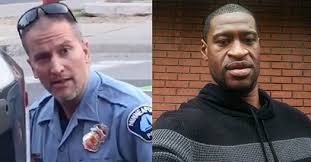 The white police officer who was seen on video kneeling on the neck of George Floyd, a handcuffed black man who died in custody after pleading that he could not breathe, was arrested Friday and charged with murder in a case that sparked protests across the United States and violence in Minneapolis, Minnesota.

Derek Chauvin, the officer seen on a bystander’s mobile phone video kneeling on Floyd’s neck on Monday before the 46-year-old man died, has been charged with third-degree murder and manslaughter, Hennepin County Attorney Mike Freeman told a news briefing.

“He is in custody and has been charged with murder,” Freeman said of Chauvin. “We have evidence, we have the citizen’s camera’s video, the horrible, horrific, terrible thing we have all seen over and over again, we have the officer’s body-worn camera, we have statements from some witnesses.”

The mobile phone footage showed Floyd repeatedly moaning and gasping while he pleaded to Chauvin, kneeling on his neck, “Please, I can’t breathe.” After several minutes, Floyd gradually grows quiet and ceases to move.

The arrest and charges come after three days of protests, which escalated in violence as demonstrators torched a police precinct that had been abandoned by officers.

Residents welcomed the charges, but said the other three officers involved must also be arrested and charged.

Freeman said those officers were still under investigation.

With smoke drifting over Minneapolis, Minnesota Governor Tim Walz on Friday acknowledged the “abject failure” of the response to this week’s violent protests and called for swift justice for police involved in Floyd’s death.

Walz said the state would take over the response and that it’s time to show respect and dignity to those who are suffering. The US National Guard had arrived in Minneapolis by midday Thursday.

“Minneapolis and Saint Paul are on fire. The fire is still smouldering in our streets. The ashes are symbolic of decades and generations of pain, of anguish unheard,” Walz said, adding, “Now generations of pain is manifesting itself in front of the world – and the world is watching.”

His comments came the morning after protesters torched a police station that officers abandoned during a third night of violence.

The governor faced tough questions after National Guard leader Major General Jon Jensen blamed a lack of clarity about the guard’s mission for a slow response. Walz said the state was in a supporting role and that it was up to city leaders to run the situation.

“You will not see that tonight, there will be no lack of leadership,” Walz said.

Dozens of fires were also set in nearby Saint Paul, where nearly 200 businesses were damaged or looted. Protests spread across the US, fuelled by outrage over Floyd’s death, and years of violence against African Americans at the hands of police.