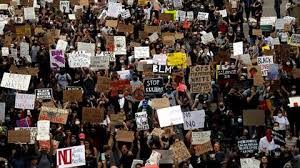 The first of several Black Lives Matter protests across Australia got underway in Adelaide as a court in Sydney banned a planned rally in the city citing the risk of coronavirus transmissions.

Huge crowds were seen in the first gathering in the southern city of Adelaide, which was held to honour George Floyd and to protest against the deaths of indigenous Australians in custody.

That was the plan in Sydney as well, where thousands of people were expected to rally. But New South Wales state Supreme Court Justice Des Fagan ruled on Friday that the rally was not an authorized public assembly. Fagan said he understood the rally was designed to coincide with similar events in other countries.

“I don’t diminish the importance of the issues and no one would deny them in normal circumstances,” he said. “No one denies them that but we’re talking about a situation of a health crisis.”