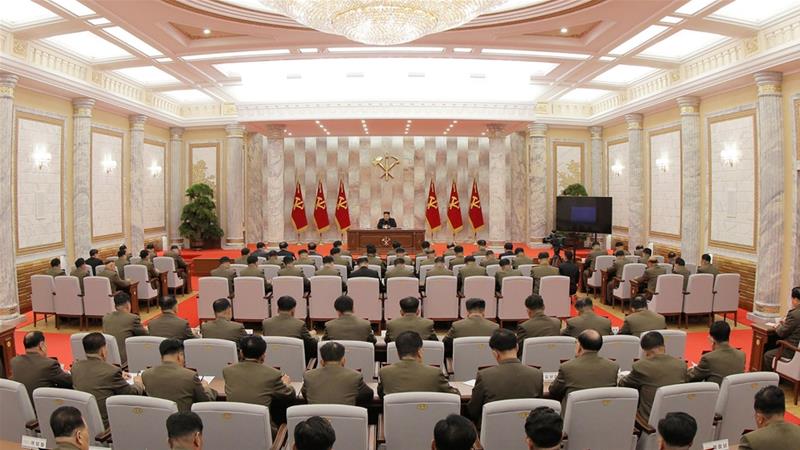 North Korea has announced it will suspend “military action plans” against South Korea, after a meeting of the governing party’s Central Military Commission presided over by leader Kim Jong Un, the official KCNA news agency said on Wednesday.

The committee members “took stock of the prevailing situation” before deciding to suspend the plans, the report said, without elaborating.

Political tensions between the two Koreas have been rising over Pyongyang’s objections to plans by defector-led groups in South Korea to fly propaganda leaflets across the border. North Korea is also suffering under economic sanctions that it wants eased as part of denuclearisation talks that have been stalled for months.

North Korea claims the defectors’ campaigns violate an agreement between the two aimed at preventing military confrontation, and has accused them of insulting the dignity of North Korea’s supreme leadership.

In recent weeks, North Korea has blown up a joint liaison office on its side of the border, declared an end to dialogue with South Korea, and threatened military action.

Kim’s sister, Kim Yo Jong, warned last week of retaliatory measures against South Korea that could involve the military, although she did not elaborate.

The General Staff of the Korean People’s Army later said it had been studying an “action plan” that included sending troops into joint tourism and economic zones, reoccupying border guard posts that had been abandoned under an inter-Korean pact, taking steps to “turn the front line into a fortress”, and supporting plans for North Korea to send its own propaganda leaflets into South Korea.

North Korea’s military was seen putting up loudspeakers near the Korean Demilitarized Zone, a military source told Reuters on Tuesday. Yonhap news agency reported on Wednesday that the loudspeakers were being removed.

Yoh Sang-key, spokesman of South Korea’s Unification Ministry, said Seoul was “closely reviewing” North Korea’s report but did not elaborate further. He also said it was the first report in state media of Kim holding a video conferencing meeting.

Al Jazeera’s Rob McBride, reporting from Seoul in South Korea, said the North’s actions follow a now-familiar pattern of “increase in tensions with a lot of vitriol, rhetoric and threats only for it all to be dialled down”.

“It seems North Korea has achieved its interim objective, in terms of getting international attention and reminding the United States where the Korean Peninsula is. It has certainly unnerved South Korea – that may lead to more humanitarian aid, which South Korea can give despite international sanctions,” he said.

“This has been important also for the individuals involved. We’ve had Kim Yo Jong coming to the fore and increasing her stature on the Korean Peninsula and the world stage. It has allowed Kim Jong Un, in his first statement in all of this, to appear as the voice of reason and dial things down – really doing a kind of good-cop bad-cop routine, with Kim Jong Un emerging as a good cop on the day before an important anniversary.”

Thursday marks 70 years since the start of the Korean War. The fighting ended in 1953 with an armistice. A formal peace treaty has never been signed.